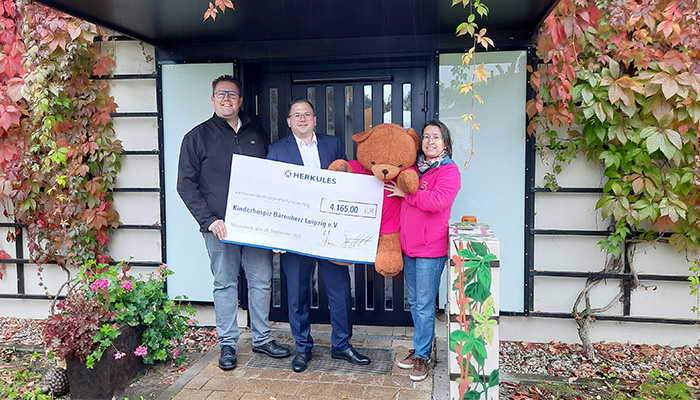 At the beginning of September, there was a joyful occasion at Maschinenfabrik Herkules in Meuselwitz: On a sunny Saturday, employees, former employees as well as friends and relatives came together on the company premises to celebrate the 30th anniversary of the company in a fitting manner as part of a summer festival.

Good food, music and entertainment for young and old made the day a successful event. The large-scale raffle not only caused a stir with great prizes - ticket sales raised a significant amount of 4165 euros, which was handed over to the children's hospice in Leipzig on September 28, 2022. "We are proud of our company, which has distinguished itself for 30 years not only through outstanding technology, but also through its employees, who put their heart and soul into their work. It's great that we can support the Bärenherz children's hospice in Leipzig with such a sum!" says Jan Otterbach, President & COO of Maschinenfabrik Herkules in Meuselwitz, who was on site in Leipzig together with Plant Manager Benjamin Klein when the donation check was handed over to Kerstin Stadler (Assistant to the Management).