Project Work of the Apprentices from Siegen a Complete Success

In cooperation with the children's and youth recreational facility BlueBox of the Stadtjugendring Siegen e.V., WaldrichSiegen and Herkules apprentices have designed and implemented a great project for the Numbach skate park in Siegen. 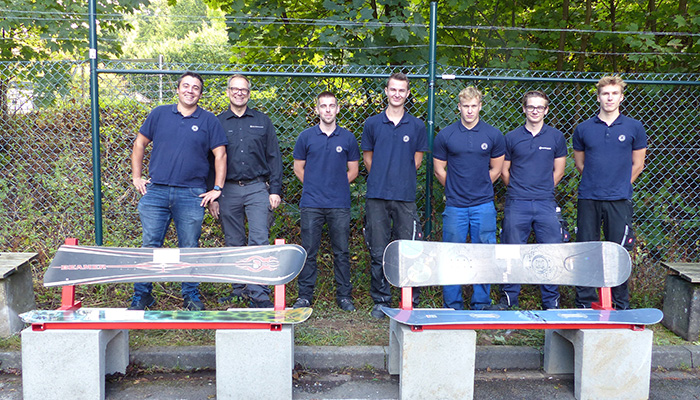 The Numbach skate park, conveniently located between Café del Sol and the Timberjack steakhouse, enjoys great popularity. Children and young people meet here almost daily to pursue their hobby with scooters and skateboards. It's no wonder that with so much traffic, the odd repair becomes necessary after a while.

A special team has therefore come together to get the skate park back in shape. The idea came from Ralf Schumann, facility manager at the BlueBox youth center who is responsible for the association's cooperation work. Together with the Youth and Parks Department of the city of Siegen and a motivated team of young people, they gave the park a makeover: The ramps were relocated and the green spaces were spruced up. One task remained: what was to be done with the weather-beaten benches?

The plan: to design a new structure onto which weather-resistant and robust seats and backrests could subsequently be fitted. "Due to a lack of resources in terms of materials and tools, however, we were unfortunately unable to build the new structure ourselves," explains Ralf Schumann, who fortunately had the bright idea: "My son Nils is training to be a mechatronics technician at Herkules. That's how I came up with the idea of contacting the apprentice workshop at Maschinenfabrik Herkules and WaldrichSiegen and asking if the apprentices wouldn't like to work on this project.".

And the idea was well received. In consultation with managing director Marco Tannert, instructors Ralf Pries and Matthias Damski quickly put together a project team of apprentices who developed an idea for a welded construction as a substructure for the seat and backrest and, based on this, built a model that would ultimately become the prototype for the new benches. Based on this structure, another sponsor, "Windsurfing Siegerland" , Siegen's largest board sports specialist for snowboards, skis and skateboards was able to enter the race with a great idea for the seating surfaces. "Discarded snowboards may no longer be suitable for downhill snowboarding due to age and wear, but they are perfect for creative recycling," says Schumann. "This way, none of the boards have to go in the trash. A really cool eye-catcher that shows that this project places a lot of value on sustainability.“

After a few weeks of work, the time had come. On September 16, 2022, the benches could finally be installed in the park. "Our apprentices didn't just build the frames, they are also responsible for the labor input and process here on the project site itself," explains Ralf Pries. "Every work step has to be implemented and coordinated within the group. This is the only way to bring the project to a successful conclusion.“

With a lot of attention to detail and commitment, every screw fits in the end. Two of the total of three benches now stand on the grounds of the skate park, carrying a specially made dedication plaque. The third bench will follow at the end of the coming ski season, when new boards are available for upcycling.
A great event, which was rewarded with a lot of praise in the end and a hearty lunch break was a nice conclusion.